Location: Milano
Source: retaildesignblog
Made by: Anidride Design
Published in: March 25 2015 / Pop-Up Shops / Stand
The Italian brand Blackfin Titanium Eyewear is being developed very fast and â€“ since 2007 â€“ it has been offering high quality eyeglasses whose basic design is defined by the simple lines and arcs that characterize the frames. These eyeglasses are exclusively made in Italy by using high quality Japanese titanium, which is proficiently shaped thanks to the solid forty-four-years technical experience of the company which is, on the other side, driven by an extraordinarily young philosophy. 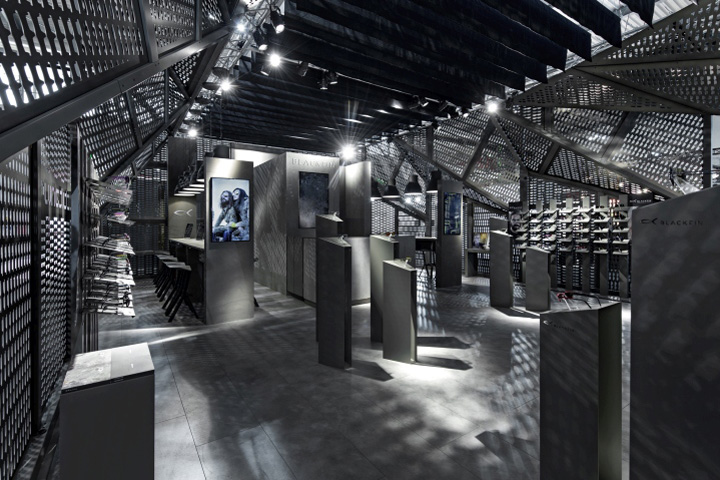 The stand â€“ created for MIDO 2015 by anidride\design studio from Venice â€“ takes centre stage as a powerful â€œmachineâ€ able to represent the journey undertaken by Blackfin during its development. Its strong scenic impact expresses and underlines the decisive character of the brand and its powerful design and performance values. The materials used and the finishes, like the pierced sheet metal in the main structure, the concrete on the floor and walls, and the black TNT on the ceiling, are powerful and strong.

The exhibition inside the stand is tidy and rational, characterized by the visual impact of the solemn free-standing displays and by the impressive structure of the central monolithic block. Anyway, the outstanding scenic item that most catches and involves the visitorâ€™s attention is a moving turbine which has a diameter of 300 centimetres and lays on the perimeter wall of the stand, matching perfectly with the mood of the advertising campaign and the products. This item contributes to create a unique stand, unique as the role played by Blackfin in optics. In the middle of the stand there is the Ciprianiâ€™s bar, which confirms the partnership between the two brands. Thanks to the quality and excellence of its products, they bring into the world the image of the authentic Made in Italy.

The BLACKFIN stand, called â€œBlack Shardâ€ by anidride\design studio, won the BESTAND MIDO 2015 award thanks to its originality and communicative nature. 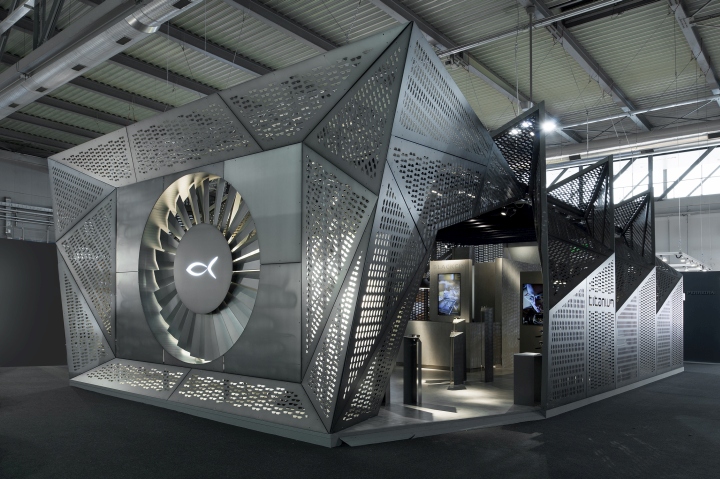 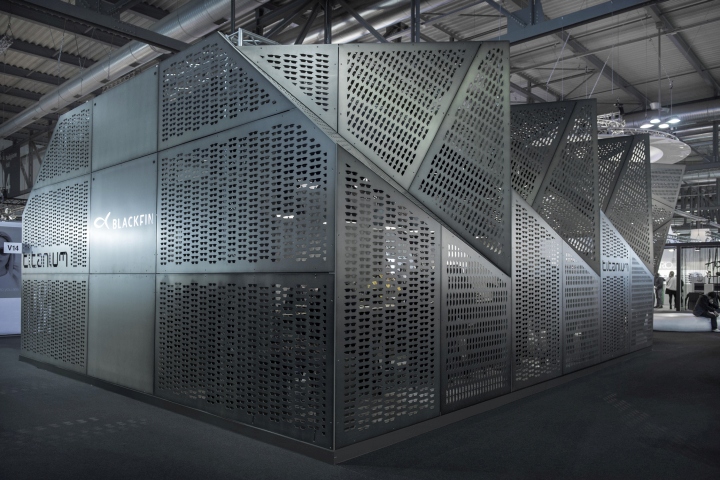 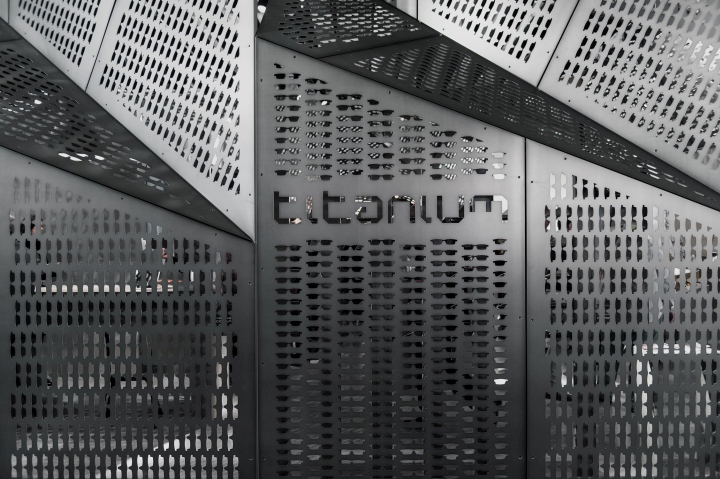 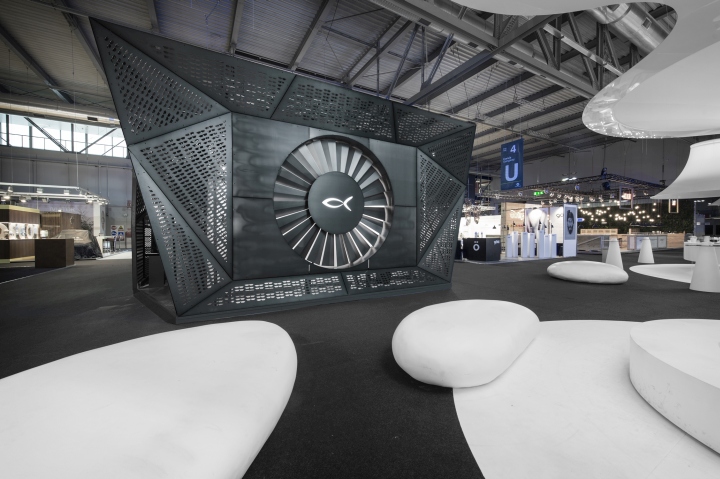 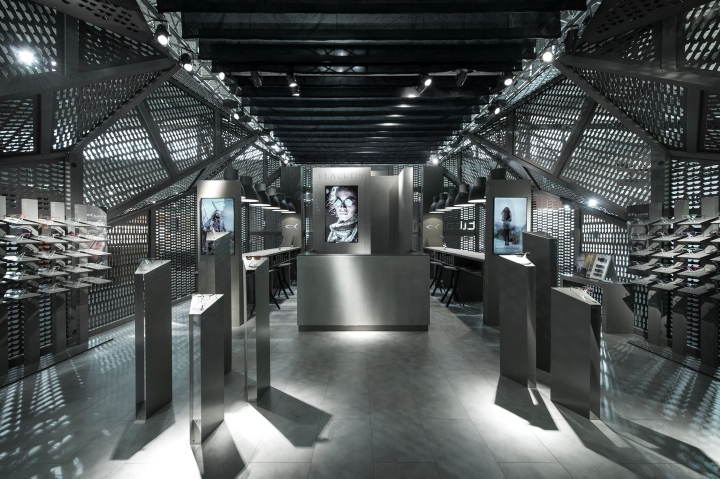 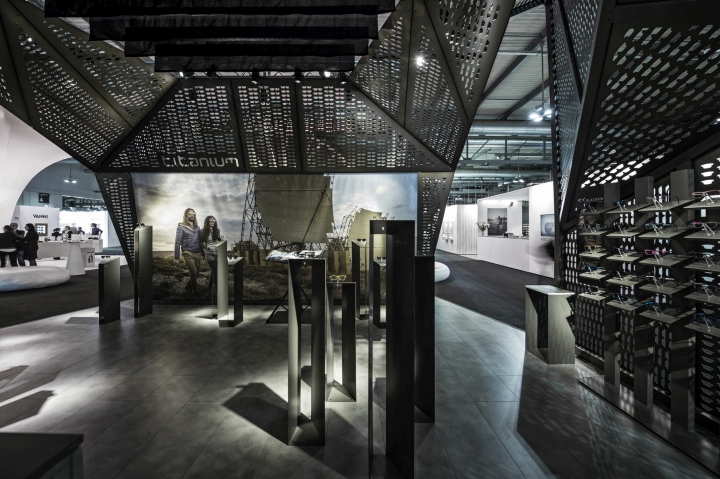 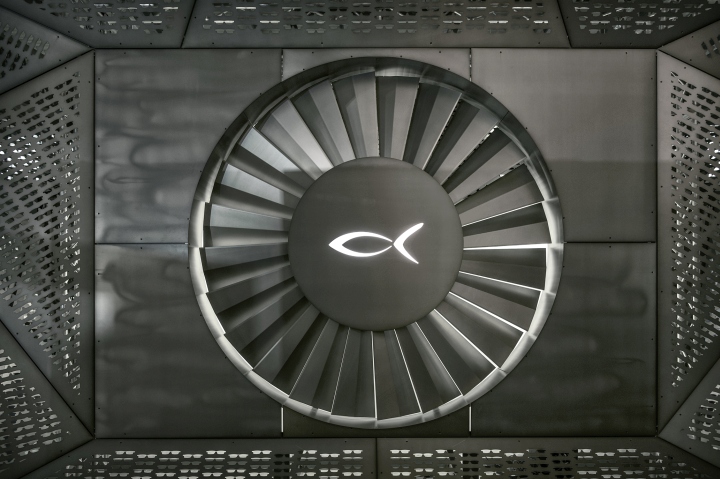